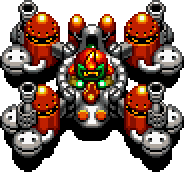 Breast Fire is the second boss of Super Bomberman 2. Its passenger is Golem Bomber.

The boss will typically damage itself with its own explosions, and can actually be defeated without a single bomb having been set by the player. Fireballs can even be "guided" to explode on a row or column that the boss occupies.

Retrieved from "https://bomberman.fandom.com/wiki/Breast_Fire?oldid=24106"
Community content is available under CC-BY-SA unless otherwise noted.