The game follows Cheerful White, Cool Black, Cute Pink, and the Goldies (Giant Gold, Bookworm Green, and Kid Blue) arriving at the new theme park, Bom-Bom Kingdom. Since Gold's dad owns stock in the theme park, the group got a reservation... however, it was for a date with Pink, and Gold's partners, Green and Blue, came to back him up after asking their leader's dad, and, following with that, he invited White and Black to come along as well.

Arriving at the kingdom, they're introduced to the Star Bomber, the owner and 'World's Best Wizard'. A magician by trade, the Star Bomber later helps out White in the game by activating spells to reach areas within the park. But behind the scenes; the Evil Bomber, jealous of the Star Bomber's popularity, begins a plot to take over the park.

It isn't until the end of the game the plot is set in motion; the sky turns dark, and all of the people still in the park are brainwashed and/or put into trances, leaving them helpless. However, the only three not affected by this spell are Cheerful White, Cute Pink (or Acrobat Aqua, depending on which path you are taking by collecting the most Heart Pieces from one of the two girls), and Star Bomber. However, being powered by the joys and laughter of everyone within the park and the staff, the Star Bomber has no magic power to use, leaving it up to White and Pink (or Aqua) to find the Light Key (or Water Key) and Dark Key and save the day!

To play through the game, you have to play mini-games, like the original Land Touch!. Through the four zones, three buildings, and hidden caverns, you can find tresure chests, pieces, and mini-game tents. If you get the top score within the tent, you obtain one Zone piece. There are four zones; Star Zone, Moon Zone, Sunny Zone, and Earth Zone. By comepleteing the minigame again, you get a token. In each zone, there is a Bomber House, and by winning that, you either get three tokens (by beating regular computers), or a rainbow piece (by defeating the Zone's boss.) There are 40 minigames and 5 Super minigames (Harder Minigames).

Apart from Land Mode/Story Mode, there is an Attraction Mode. Here, if you beat the Star Score (usually higher than the original Highscore), and by doing so, you unlock a card from the Treasure Chest. As well, there is a Tower Mode; beating computers in randomly chosen attractions, where you only get one chance.

Bomberman Land Touch! 2, like Bomberman Story DS, features "Bomberman Battle Pack 2". Various sources detail that any game containing these battle packs are compatible with each other in Battle Mode. It is therefore assumed that players of Bomberman Story DS can connect over local wireless and Nintendo WiFi Connection to players of Bomberman Land Touch! 2. It is currently unknown if more upcoming Bomberman games will feature this battle pack system, but it is likely.

It is also possible that this battle pack is a method to increase online WiFi play across multiple games. 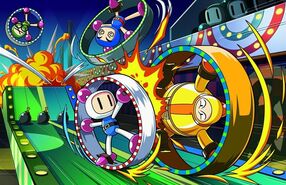 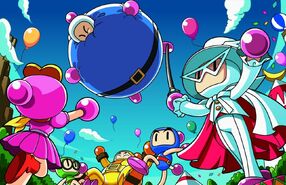 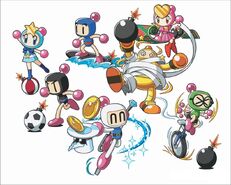 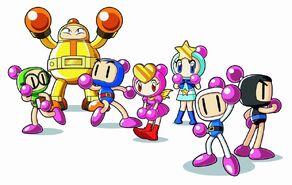 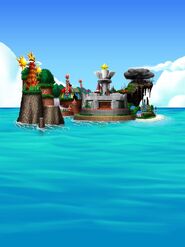 Render of the Island
Add a photo to this gallery

Retrieved from "https://bomberman.fandom.com/wiki/Bomberman_Land_Touch!_2?oldid=43157"
Community content is available under CC-BY-SA unless otherwise noted.