If you were looking for the sequel, see Bomberman Land Touch! 2

Bomberman Land Touch!, also known as Touch! Bomberman Land (Touch!ボンバーマンランド) in Japan, is a puzzle video game for the Nintendo DS. This is the first game of the Bomberman Land series to be released outside of Japan.

Cheerful White is invited to Bomber Pirate Island. When he arrives, he sees all of his friends are there as well. White will compete against them and do his best to become the "Pirate King" of the island. A vast amusement park awaits them that includes caves, aquariums and mountains that divide the island into five zones.

There are over 30 mini-games available. The player can collect various pieces, costumes, and bombs to help further their progress in the game. They can explore as much of the over world that is unlocked and more will unlock with their progress. The only method of control that can be used is touch control: both for the over world and in the mini-games. The microphone is used in certain mini-games as well.

The mini-games can be replayed in Attraction mode either alone or with other players.

The game is compatible with the Bomberman Battle Pack 1. 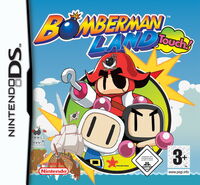 EU Box Art
Add a photo to this gallery

Retrieved from "https://bomberman.fandom.com/wiki/Bomberman_Land_Touch!?oldid=41056"
Community content is available under CC-BY-SA unless otherwise noted.