Bomberman Hero, known as Bomberman Hero: Princess Millian Rescue! (ボンバーマンヒーロー ミリアン王女を救え!) in Japan, was released for the Nintendo 64 in 1998 and for the Wii Virtual Console in 2011. Hero focuses on single player action and is one of the few Bomberman games to not include any sort of multiplayer mode. To date, it remains the only Bomberman game in the 3D platformer genre.

Though many have compared the game to Super Mario 64, it follows a quite different gameplay style and structure, with linear stages and fixed camera angles. Also, while collectathon elements are present, the focus is instead on attaining a perfect score or time on each stage, on which the player is graded.

As taken from the English manual:

"Bomberman was training very hard day and night at Bomber Base to keep the universe peaceful.

One day, he received an order to check out a spaceship that had crashed in the Peace Mountains. When our hero arrived at the scene, he found a strange looking robot. According to this robot, the planet Primus Star was attacked by the Garaden Empire. This robot was able to escape with Princess Millian of Primus Star via spaceship, but the Garaden Empire captured them and took the princess away...

To help out, Bomberman left his home and embarked on a journey to save Princess Millian!"

The player must navigate White Bomber through 3D environments to find the exit. By default, he can jump, climb on ledges, throw bombs, and lay and kick bombs. Some stages feature White Bomber wearing different Power Gear, which have totally different control schemes. Louie also assists White Bomber as a rideable mount in certain stages, with his own unique playstyle.

Unlike in most Bomberman games, laying and kicking bombs are of limited usefulness, except in situations where they are required (such as to activate a switch through a small hole). For most of the game, players will rely on hurling bombs at enemies and objects, which detonate immediately upon impact.

When the player clears a stage they are given a rank from 1-5 based on how high their score was. You can build your score by defeating enemies, collecting gems or power ups, or destroying objects. For boss stages, the score is dependent on how fast the boss is beaten. To earn a 5 you must earn every possible point in the stage. There are five planets and one secret one. Most of the planets have three areas with about 5 to 7 stages each. To access the secret planet Gossick Star and fight the true final boss, all the hidden Adok Bomb items must be collected, and the player must attain a perfect score in each prior stage.

Additionally, there are two bonus game modes that can be played from the options menu, Slider Race and Millian's Treasure Hunt. These are unlocked after collecting 3 and 6 gold medals, respectively. Gold medals are awarded after attaining a rank of 5 for every stage in a single world. Slider Race is a short minigame challenge with the Bomber Slider down a slope covered with ice walls. Millian's Treasure Hunt is a return trip through the entire main game, except with a different storyline, where the Adok Bombs have been replaced by pieces of treasure belonging to Princess Millian.

Golden Bomber has his own set of levels (three) which are unlocked after clearing Gossick Star. These do not appear on the level selection menu. Two of them are repeats of levels which used a Power Gear, but instead they are now done while walking on the ground, and the last one is a completely unique level.

Bomber Star can be unlocked at any point in the game by pressing the Start button rapidly during the intro cinematic, then selecting the Bonus option.

Bomberman Hero is well regarded for its highly distinctive soundtrack by series veteran Jun "Chiki" Chikuma, which incorporates elements of hip-hop, breakbeat and Detroit techno, along with prominent use of ambient sounds. The music has a very different identity from any other Bomberman soundtrack to date, generally sounding much more "serious" and less cartoonish than usual. The odd track titles like "Oropharynx" and "Monogenic" reflect this change in style.

The game's original soundtrack CD case art contains a very striking photograph of a real-life CD destroyed by an explosion, creating the illusion that the case has been damaged by a bomb. Strangely, there are no images related to the Bomberman series anywhere on the case, booklet or CD.[1]

The soundtrack CD also includes a bonus track that never appears in-game, "Loom." Unlike the in-game audio, this track uses real instruments, and sounds completely unlike any other music from the Bomberman series, including that of Hero. It seems this track was not intended to have anything to do with Bomberman Hero, and was included to showcase the composer's other work. 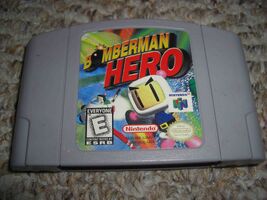 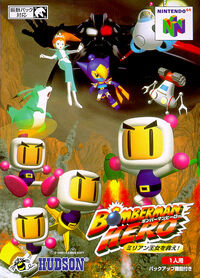 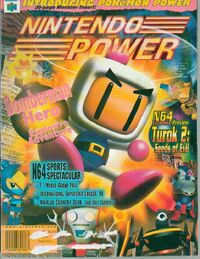 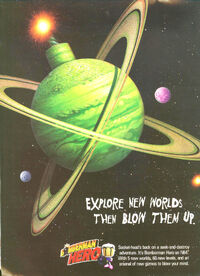 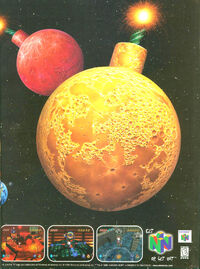 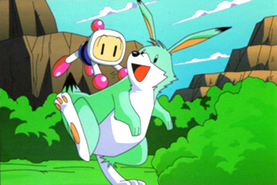 Bomberman hurt in the game

Bomberman getting weakened
Add a photo to this gallery
Retrieved from "https://bomberman.fandom.com/wiki/Bomberman_Hero?oldid=43483"
Community content is available under CC-BY-SA unless otherwise noted.