Bomberman Blast is a Bomberman multiplayer game available for the Wii (Japanese version only) and the WiiWare. It costs 1,000 Wii points to download. Bomberman Blast features three new items (called shake-items) which upon shaking the Wii remote, the player will do a specific action depending on the item.

Bomberman Blast features new items and new stages to play. An 8-player battle can be played online or offline. Miis are also playable characters, which can be unlocked by playing on all stages once.

The game controls can be used by the Wii remote held sideways or the Gamecube controller. However, this game does not support the Classic Controller.

The Japanese version both includes a Story Mode and the WiiWare version. The Wii version was released on September 25, 2008 while the WiiWare version was released on September 30, 2008. The Japanese version has an exclusive Story Mode available only to this version. The plot of the story is to rescue the player's Miis whom where kidnapped by the five bosses. Story Mode consists of 39 stages among 5 worlds.

All other versions can be downloaded for the WiiWare. These versions do not include Story Mode.

"Run around and blow everyone up to win! Classic Bomberman action!"

In Normal, the game plays the usual Bomberman gameplay.

"A countdown starts if you're bombed, and once time runs out you're toast!"

In Countdown, players have a countdown timer appear above their head. If the timer reaches zero, the player that has it is eliminated until the next game. Bombing other players adds 10 seconds to the timer. Players are also able to steal or give timers to other players.

"It's a scramble for the crown! Whoever has it at the end wins."

"It's rainin' bombs! Dodge 'em or use shields, but you can't set bombs!"

In Air Raid, bombs are dropped from the sky landing to the ground. Fire icons will appear in the adjacent tiles, indicating the strength and reach of the bomb blast before it explodes. Shields can be used at the start, and there are no soft blocks.

Bomb Change is one of the three shake-items to use in Bomberman Blast. When the Wii remote is shaken, the Bomberman will transform into a bomb. Shake the Wii remote for a few seconds to turn into a "bomb".

Rocket is another shake-item that was first introduced in Bomberman Blast. When the Wii remote is shaken, the Bomberman will rocket upwards, and, if any, avoid getting hit with a bomb blast. The Bomberman must shake the Wii remote for a few seconds in order to use the rocket.

Shield is another shake-item. When the Wii remote is shaken, the Bomberman will bring out a shield that will block the front. The Wii remote must continue to be shaken to keep the shield operating. 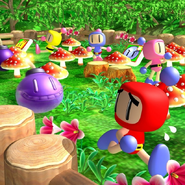 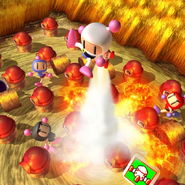 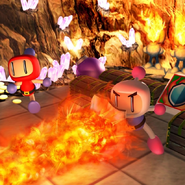 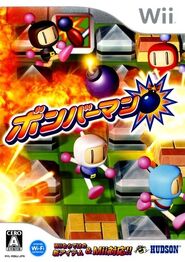 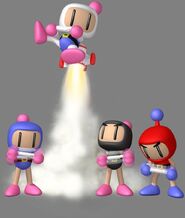