View source
watch 01:36
We're Getting Mutants in the MCU - The Loop
Do you like this video?
Play Sound

For other uses, see Bomberman (disambiguation).

Bomberman (written as Bomber Man in Japanese versions) is a maze-based video game developed by Hudson Soft and released in 1985 on NES platforms. It was ported later on various supports. As the first console incarnation, it is widely considered the first "true" game in the Bomberman series. Its mechanics are still used in the series' games today.

As taken from the English NES manual:

“Bomberman is a robot engaged in the production of bombs. Like his fellow robots, he had been put to work in an underground compound by evil forces. Bomberman found it to be an unbearably dreary existence. One day, he heard an encouraging rumor. According to the rumor, any robot that could escape the underground compound and make it to the surface could become human. Bomberman leaped at the opportunity, but escape proved to be no small task. Alerted to Bomberman's betrayal, large numbers of the enemy set out in pursuit. Bomberman can rely only on bombs of his own production for his defense. Will he ever make it up to the surface? Once there, will he really become human?”

An English approximation of the Japanese manual:

Do you know the history of the master runner Lode Runner? As a matter of fact, that master runner was formerly a robot. When the master Runner was still a robot called Bomberman, he was assigned to the job of manufacturing bombs. Of course, as with the other robots, he was forced to work in an underground labyrinth as a minion of evil. With unbearably little light and space, one day Bomberman heard a rumor. "It seems that one who escapes to the surface will become a human." Bomberman was immediately resolved. Somehow, he would make it to the surface and become a human. However, escape to the surface would not be so simple. Many enemies would give chase in order to capture the traitor Bomberman. Bomberman's only weapons are the bombs that he creates. Will he really be able to escape to the surface? And is it truly possible for him to become human?......

The player must navigate Bomberman through a maze by destroying soft blocks and enemies with his bombs. Hidden in every stage is one Power-Up that will either increase his blast radius, speed, or the number of bombs he can lay at one time, among other things. Each stage also features 1 secret item that can be uncovered under special conditions. To clear a stage, the player must find the exit that is hidden under one of the soft blocks and defeat all the enemies in order to open it. If a bomb blast touches the exit after it is exposed, more enemies will be generated out of it. There are 50 levels in total, and a password system can be used to continue the game.

The soundtrack of this game was composed by then newcomer Jun Chikuma, who created an original theme for the game. The stage theme for this game was then re-used (as remixes) in most of the classic Bomberman games (NES, PC Engine, and SNES).

The Family Computer game Bomber Man (ボンバーマン) is based on the earlier Japanese computer game Bomber Man (爆弾男 Bakudan Otoko). Bomber Man's design was changed from a human to a recolor of an enemy robot from the NES port of Lode Runner. Programmer Shinichi Nakamoto found the original man in overalls to be 'uninspired'. It also included a far greater variety of distinct enemies, actual power-ups, and horizontal scrolling for the level layouts.

It was ported back to the MSX and Rupo JW-R70F as Bomber Man Special (ボンバーマンスペシャル) the following year. The game was then later re-released for the Game Boy Advance in 2004 as part of the Classic NES Series and included in Hudson Best Collection Vol. 1: Bomberman Collection for the same support.

In addition to these versions, a number of other enhanced ports and remakes would turn up - Bomber Boy being one of the first, containing a mode based on the NES game as well as a sequel. Bomberman Party Edition is also a remake of the original single-player game, though it contains the series' now-traditional multiplayer (hence its namesake).

This title, alongside Lode Runner, would launch Hudson Soft into stardom, with the two breaking off into separate series of their own. 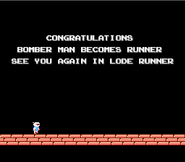 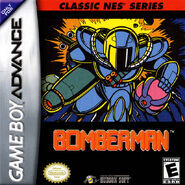 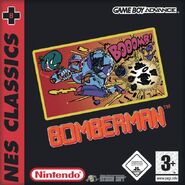