"Max Comes Back to Life"

Bomberman Jetters
Bomber Zero (sometimes referred to as just Zero) is one of the major characters in the anime Bomberman Jetters. Zero debuts in "We, the Jetters!," although officially in "Max Comes Back to Life."

When he is first awakened by Misty, he seems to suffer from amnesia. He didn't know who he was, but continuously kept getting flashbacks relating to Mighty. All the characters besides Misty assume he was Max, brought back to life. This was until Max attempts to take out the Jetters in one go, when Zero arrives and stops him. Eventually, he regains enough of his memory to remember who he is (or rather, who Mighty was) and visits Momo on his own.

It is later revealed that he was a prototype unit for Max built by Dr. Mechado. He was created to absorb data from Mighty so that Mechado could learn the Bomberman's secret, or at least their ability to use bombs. When Zero absorbed Mighty's data, just before Mighty destroyed the Hige base, Zero absorbed too much data, absorbing both his memories and his heart and became just like Mighty. With this, he was able to use Mighty's powers and shared similar personality traits. When he awoke in Mechado's lab after escaping the base just as it exploded, he instantly recognized and rebelled against Mechado, but his power was cut before he could take any action. Mechado left him in the remains of the Hige base where Mighty was killed, until he was discovered by Misty.

Zero defeated Max in combat but became possessed by his spirit. White Bomber defeated Zero in this form and caused enough damage to defeat Max's spirit, but caused Zero to die in the process. Zero gave White Bomber a final gift which was a recording of Mighty's final moments for all to see.

Zero is capable of creating Fire Bombs, first seen in "A B-1 Match! Burn, White Bomber!" Unlike other Fire Bombs, Zero's Fire Bomb is purple in color, this is later explained when it was discovered that Zero has Mighty's memories, thus gain him an ability to use an artificial bomb which is similar to the Sal-T Bomb.

Zero has developed relationships with other characters.

Unknowing the truth about Zero's identity, White Bomber despised Zero and attempted, with the Jetters, to take him out. After observing the two androids clash in battle in "Rebirth of the Dark Hige Hige Bandits," White Bomber opens up slightly but still disapproves him from helping the Jetters in the following mission.

Misty finds a weakened Zero back at the remains of the Hige Hige base. After calling in a repairman, Zero reawakens with no memories of himself but continually has flashbacks. As the Jetters discover Zero, who mistake him as Max, Misty attempts to protect Max from the enraged group before making their getaway.

Zero and Max have developed a rivalry after meeting each other in "Rebirth of the Dark Hige Hige Bandits."

As the one who created him, Dr. Mechado created the prototype to obtain the secrets to the bomb element. During a mission to destroy the Hige Hige base, Mighty was interrupted by Zero, who jabbed Mighty to absorb his data, as well as his heart and memories. Zero returns to Mechado; however, Zero "reawakens" as Mighty, shocking Mechado to the point of shutting him down. Afterwards, Mechado dumps Zero into the remains of the old Hige Hige base. 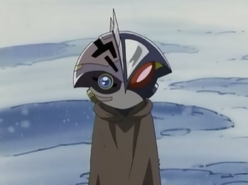 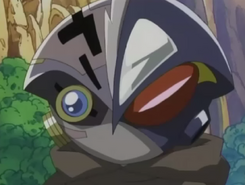 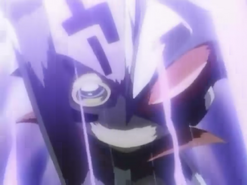 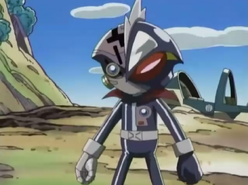 Without his robe
Community content is available under CC-BY-SA unless otherwise noted.