Motobomber (モトボンバー) also known as Moto and Bomber Moto is a type of vehicle in the Bomberman GB series.

In Bomberman GB (Wario Blast in international release) there was only one Motobomber that can be obtained once you complete Round 5 (Coma Zone). It allow Bomberman's (or Wario) to jump over 1 Hard Block when he run into it (providing that there is no Soft Block in the way), usually use it for a surprise attack. Bomberman's still die in one hit though.

In Bomberman GB 2, there was still only one Motobomber that available after you finish Round 5 (Desert), however the Motobomber can now take 1 hit for you, then it will broke. The Motobomber will only return when you lose a life or enter a new world.

In Bomberman GB 3, there are 4 models of them, and all are created by Cutie Bomber and can be exchanged with Bomber Capsules in her shop. After purchasing one, the player can select them before each level, each offering additional HP and other abilities.

The motorcycles have the following costs and benefits: 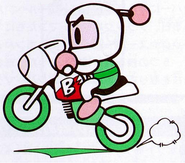 Motobomber in the manual of Bomberman GB 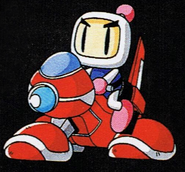 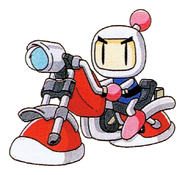 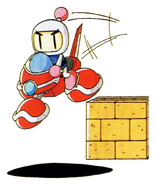 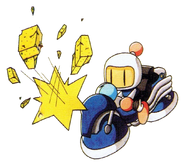