Bomberman Hero
Bomberman Max 2
Bomber Base is located on Planet Bomber. It is the home headquarters of Bomberman, Max, and other members of the Bomber Nebula federal police (such as Nitros). Dr. Ein of the BOMB Research Laboratory is a frequent contact and ally.

It makes its first named appearance in Bomberman Hero as the first area on Planet Bomber. It is where Bomberman does his basic training before heading out into the Sea of Trees. It is composed of five stages:

It reappears in Bomberman Max 2, with dome-shaped facilities and lacking the main Bomberman tower. A very similar building appears in Super Bomberman R, where it appears to be a hybrid of the aforementioned appearances; however, it is not explicitly referred to as Bomber Base. Another possible appearance is Super Bomberman 3, in which it or an affiliate is depicted as a space station housing the World Bombers. The inside was seen in the beginning of Bomberman Generation. 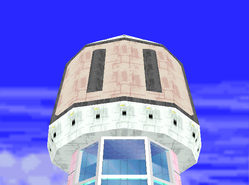 Bomber Base tower in Bomberman Hero 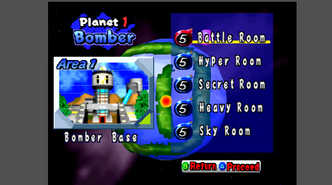 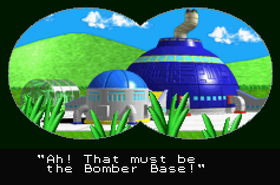 Bomber Base in Bomberman Max 2
Add a photo to this gallery
Retrieved from "https://bomberman.fandom.com/wiki/Bomber_Base?oldid=43545"
Community content is available under CC-BY-SA unless otherwise noted.