Not to be confused with Bomb-Up, a power-up that increases bomb capacity.

The Bomb is usually the player's sole method of attack in the Bomberman series.

Players have an unlimited amount of bombs at their disposal, and are only hindered by how many they can have on screen at the same time (see: Bomb-Up) and how large the bombs' explosions are (see: Fire-Up). In grid-based Bomberman games, most 2D RPG-style Bomberman games, and the Panic Bomber Series, bombs explode in a + shape, with fire extending on all four possible sides. This was originally due to the grid-style areas, but has carried over as a trademark into non grid-based games. The other type of bomb will explode in a spherical blast, first seen in Bomberman 64. In some games, the player will have access to both types of bombs.

In some cases, most notably from the anime, bombs are used for fun. Usually, these bombs are created or used by White Bomber. Some known bombs are Balloon Bombs and Campfire Bombs.

Bombs can be powered up (or, in some cases, powered down) by collecting Fire-Up and Bomb-Up panels. These increase the size of your blasts and the number of bombs you can have on screen at the same time, respectively.

There are also items that will change the behavior of your bombs. These include, but are not limited to:

In most Bomberman RPGs, White Bomber will get the ability to use different kinds of bombs, either by fusing a Bomb Core with another object or by collecting a special item, such as the Bomb Elements.

In some 3D Bomberman games, such as Bomberman 64, the player can "pump up" a bomb that they are holding by pressing a button repeatedly, holding a button, or by rotating the joystick. The bomb increases in size until it reaches a maximum, at which point a small yellow flash appears around it. The bomb can then be thrown, and will explode in a much larger blast than it would have before. Pumped Bombs are also more powerful, doing more damage to most enemies (the only exceptions being Bomberman-styled bosses) and objects, as well as being able to destroy or damage some enemies and objects that normal bombs would have no effect on. Thrown Pumped Bombs can also instantly kill some enemies in Bomberman 64 that would have taken more hits, so long as the bomb hits the enemy on the head. In Bomberman 64: The Second Attack, Pumped Bombs have flashier and more dramatic explosions, and usually last longer than regular blasts, making them more efficient for some bosses. 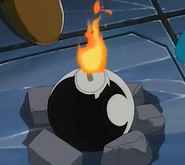 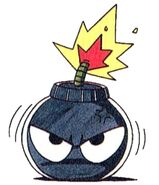 Mechabomb, a bomb-like enemy found in some games of the series.