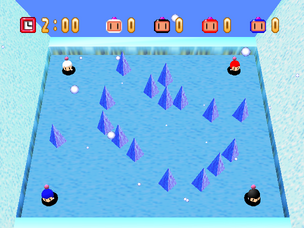 Blizzard Battle (ブリザードバトル) is the ninth stage in the Battle Mode of Bomberman 64. It is unlocked when all 120 Gold Cards have been collected and all six worlds have been cleared in the Story Mode. The stage takes place in a snow field, with a violent snow storm blowing through. Periodically, the wind may change directions, either blowing in one of the four diagonal directions or not blowing at all. The wind moves both bombs and players, and even affects things that have been thrown in the air. There are 16 Soft Blocks at the onset of the stage.

The suggested strategy is to move against the wind when fighting opponents. A bomb that is thrown in the direction of the wind can travel across to the other side of the stage. Players may use this to their advantage by moving against the wind, securing a position, and throwing and kicking bombs with the wind at their opponents.

When Sudden Death begins, avalanches from the left and right walls will start to close in on the stage.

Retrieved from "https://bomberman.fandom.com/wiki/Blizzard_Battle?oldid=27494"
Community content is available under CC-BY-SA unless otherwise noted.