Bomberman Jetters
Birdy (also called Birdie by Majesco) is an agile, smart, and strong member of the Jetters and was one of Mighty's best friends. As well as being a member of Jetters, Birdy has a part-time job as a taxi driver. Despite his humanoid appearance, he has other traits which are not unlike birds of prey; he has wings which enable him to fly, which are usually hidden under his clothes, he can throw sharp feathers which are mostly used to stun opponents, and his feet are in fact talons, which can be used to grasp items or people whilst in flight.

Not much is known about Birdy's life prior to the start of the series. Unlike other characters in the anime, his backstory is not expanded on, other than that he was close to Mighty and saw him as his best friend. However, Birdy's actions in the story shed more light on his personality. Birdy is a serious, intelligent and focused operator without much of a sense of humor, but he is prone to losing his composure when one of his allies is in danger. He also becomes angry quickly whenever he feels that he has been disrespected. He is often at odds with the other Jetters members due to personality differences, and is frustrated by their relative lack of skill when on missions, but he remains loyal to and protective of them.

Birdy is shown to be a highly skilled fighter (perhaps equally strong as Max), but he usually holds back from using his abilities, except when there is an imminent threat to someone's life. He likely does this so that Shirobon will be able to strengthen himself and mature. When he first met Shirobon, Birdy had a low opinion of him in comparison to Mighty, and couldn't believe that they were brothers. However, he eventually sees potential in Shirobon, and tries to help him grow into a Bomberman as strong as his older brother.

Birdy appears to dislike women, since he was initially angry about a woman (Shout) being appointed the new leader of the Jetters after Mighty's disappearance. (Though this was at least partly due to Birdy being worried for her safety.) Also, Mujoe comments about being surprised to see Birdy show kindness towards a woman when he later expresses concern for Shout. Despite this, Birdy had become the object of Mermaid Bomber's girlish affections before she was defeated by Shirobon.

At the beginning of the anime, Mighty and the rest of the Jetters were on a mission to prevent the Hige Hige from obtaining a unique diamond. However, the Hige Hige Bandits accidentally hit Mighty and Birdy with a weapon Mujoe brought intended only to intimidate them. After the mission, Birdy and Mighty made plans to get rid of the Hige Hige once and for all, but Birdy fainted. Bongo and Gangu attended to Birdy's wounds while Mighty went to do the mission, that he and Birdy planned, solo. Mighty was intended for this to be his last mission before leaving the Jetters. However, Mighty's injuries were too severe from the weapon that hit him and did not return to Jetters HQ. Birdy decided to find out what happened to Mighty on his own. After weeks of searching, he bumped into Nightly. Nightly reassured Birdy, saying he would get information for Birdy about Mighty's disappearance. 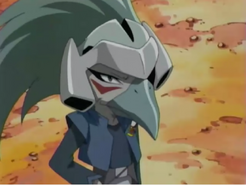 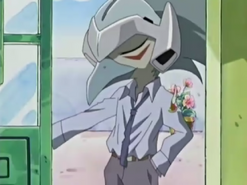 Birdy in his Taxi Uniform 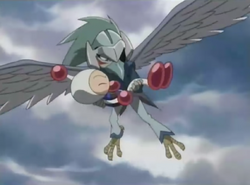 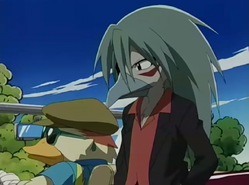 Birdy with his hair down 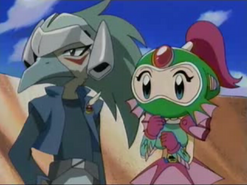 With Mermaid Bomber.
Add a photo to this gallery
Retrieved from "https://bomberman.fandom.com/wiki/Birdy?oldid=41135"
Community content is available under CC-BY-SA unless otherwise noted.