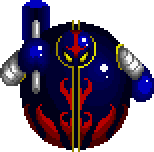 Bigaron (ビガロン) is an enemy in Super Bomberman. It is the boss of the first world. It is a large robot that wields a hammer.

Bigaron moves between blocks at a slow speed of 2, pursuing the player. It will harm players on collision. Despite its large appearance, its collision area is a single block space at the bottom of its body.

Every now and then, Bigaron will suddenly stop and swing its hammer into the ground, sending several chunks of debris flying a short distance outward from the impact. The debris will harm players on collision.

Retrieved from "https://bomberman.fandom.com/wiki/Bigaron?oldid=36023"
Community content is available under CC-BY-SA unless otherwise noted.