In her first and only appearance (in Bomberman Generation) she and the rest of the Crush Bombers were hired by Mujoe to recover the "Bomb Elements", six crystals who act as the source and origin of the universe's power, that were lost in a planet called Tentacalls. Professor Ein, knowing about this, sends White Bomberman to defeat the Crush Bombers, the Hige Hige Bandits and Mujoe, as well as recover the Bomb Elements. she is the second Crush Bomber confronted by Bomberman. Upon defeat, she falls to her knees, complaining that her defeat "Really Stinks", exploding straight afterwards.

Beauty Bomber shares a few similar traits with Bomberman Jetters character Mermaid Bomber: She is spoiled, materialistic, immature, and true to her namesake she sports a beautiful and youthful complexion, which she gloats about to White Bomberman. As her boss stage in Curreina Fields implies, Beauty Bomber has a fondness for pretty things like jewels as the background sports multiple-colored rocks all over the ice. She also throws tantrums when she doesn't have her way as shown in her defeat.

Symbol of Love and Beauty 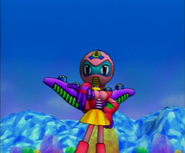 Pose 1
Add a photo to this gallery
Retrieved from "https://bomberman.fandom.com/wiki/Beauty_Bomber?oldid=39590"
Community content is available under CC-BY-SA unless otherwise noted.