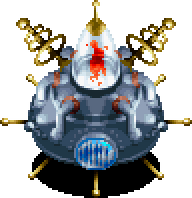 Bagura's Machine is the final boss of Neo Bomberman. It appears in the final area of Stage 5. It is a large machine that was owned by Bagura. Its purpose is unknown.

Each attack is designated by a color which displays on the front of the Machine.

After sustaining 12 HP of damage, the boss will break free from its circular pattern and will move quickly in diagonal lines, turning at the outer walls of the map and ricocheting around the room. It will still harm the player on collision.

As the boss moves, Soft Blocks in the form of large rocks fall from the ceiling onto random tile spaces. Unlike normal Soft Blocks, the player cannot pass through them even with a Wall Pass or Nucha. Only 19 Soft Blocks can be on the screen at the same time.

Retrieved from "https://bomberman.fandom.com/wiki/Bagura%27s_Machine?oldid=39557"
Community content is available under CC-BY-SA unless otherwise noted.