Note: Due to inconsistencies, this character is referred to by a translation closely resembling a direct romanization ("Bagurā").
“ It's been a long time, Bomberman. I'm impressed you made it this far. You KNOW defeating me is impossible. I revived the Four Devils of Garaden and they are waiting for you! Ha ha ha! ”

Bagura (alternatively Buglear, Bagulaa, Bugler, Buglar, Buggler, Bugglar, Burglar, or Bagular) is the head of the Robot Army, White Bomberman's nemesis and primary antagonist of many Bomberman games. He usually looks like a blue and white, large, elderly Bomberman with a bushy white beard, wearing a monocle and cape. Bagular appeared out of the vastness of space, with his history being unknown but his brilliance clear. Bagura is a brilliant (but mad) scientist and a dark magician, having controlled and created many evil creatures such as Bomber-Cyborgs, with the only purpose of conquering the universe. As one of Bomberman's more resilient enemies, he will stop at nothing to achieve his goals — it seems that he will always return.

In Bomberman '94 Bagura, known as Buglear in the original version and Bagulaa in Mega Bomberman, was the main villain and final boss. He attacked Planet Bomber with his Robot Army, splitting the Spirit Pictures to throw it into chaos. Even though the planet shattered into smaller pieces, White Bomberman put it back together by repairing the Spirit Pictures. When his plans were ruined, Bagura sent his artificial comet on a collision course to the planet. Bomberman infiltrated it before it was too late and confronted Bagura. After defeating him and his dragon robot, he revealed his Bomberman form, but was still no match for the original. In the end, his comet was destroyed.

In Super Bomberman 3, Bagura, now known as Professor Bugler or Professor Buglar, appears as the master of the resurrected Five Dastardly Bombers, taking over five planets of the Bomber Nebula. White Bomberman and Black Bomberman were able to attack and defeat the Bombers, but upon losing control of the planets, Bagura targeted the planets for destruction with his Battleship. The heroes entered his ship and were able to take him and the Dastardly Bombers down, rendering them unconscious as the ship exploded. Bagura's body did not survive, but a light is shown emitting from his body. In the post-credits, his brain is revealed to have escaped in a mini saucer.

In Super Bomberman 4, Bagura summoned the Four Bomber Kings and Bomber Great to attack White Bomberman, Black Bomberman, and their friends and exact revenge on them. Bagura's minions sent the heroes hurtling through time, but they once again fought back and confronted Bagura in the giant mech he formed himself into. The mech was destroyed and his mini saucer was lost in the time void somewhere.

Although his original body was destroyed since his debut, Bagura still appears in an identical body in most appearances. How this is possible is unknown, but the most likely way of this being possible is that his body was never completely organic in the first place, which would explain his ability to create Rubber Bombs. Given that he is the "creator" of the Five Dastardly Bombers, it would make sense that he could have installed the same bomb-making ability into his own body.

He is not seen in Bomberman GB 3, but Devil Bomber is said to be an experiment of his that he locked away. In Neo Bomberman, he is shown in his original body just fine without explanation to reclaim Pretty Bomber with his new creation, Atomic Bomber. In Bomberman World, he appears to reawaken the Dark Force Bombers, but is defeated on Planet Black. He is not seen escaping the explosion, but remarks that he will return. In Bomberman Wars, which is a prequel to the previous game, he appears under the name Dark Bomber in what appears to be a reconstructed body in what may be an older time period, perhaps explaining where he wound up after the events of Super Bomberman 4.

Now known as Bagular, he makes another major appearance in Bomberman Hero, in which the Garaden Empire sets out to collect four data disks to form a different body. The army apparently had a difficult time creating a new body, or at least one suited for him, though this is largely because Princess Millian of Primus Star stole one of the disks from them and managed to send it to Planet Bomber before being captured, resulting in the disk coming into Bomberman's possession. The Garaden Empire finally reclaims the disk on Mazone Star thanks to the efforts of Natia, who disguises herself as Millian and tricks Bomberman into handing the disk to her. Despite Bomberman's best efforts, Natia manages to escape. Bagura is then revived on Garaden Star, regaining a corporeal body. This corporeal form is short-lived, however, as Bomberman defeats him, causing him to detonate the Garaden base as a final act of desperation in an attempt to kill Bomberman. Bagura's revival, Millian's kidnapping, and the creation of the Garaden Empire were plotted by Devil Bomber, who was just using Bagura to get his own revenge on Bomberman.

Bagura makes an appearance in the spinoff Bomberman Fantasy Race, and makes a cameo in the opening animation of Bomberman Jetters. Bagura eventually reappears as the antagonist of Bomberman Portable, being the source of the shadowy threat looming over the nearby planets. He is fought multiple times throughout the game, using old inventions in new ways in an effort to eliminate Bomberman.

Calling himself Emperor Buggler and with a more human appearance, he finally returns in Super Bomberman R. Evil Emperor Buggler revived the Five Dastardly Bombers (who had ended up as deactivated on Planet Scrapheap before the events of the game) to conquer the five planets of the Starry Sky Solar System in his name. The Bomberman Bros. (White and Black along with Blue, Red, Yellow, Green, Pink and Aqua) set out to stop the expansion of the Buggler Army's intergalactic conquest and liberate the invaded planets. Along the way, it is revealed on Planet Scrapheap that the reason the Five Dastardly Bombers were so dastardly was because they were forcibly under Buggler's control all along.

Buggler is chased to World 6: Black Hole, an artificial anomaly which threatens to engulf the solar system and eventually the whole universe. He summons the Five Dastardly Bombers to form Great Gattaida, Pink Bomber then gets put in distress when she finds out that Buggler used her big sister, Pretty Bomber in the combined mecha, White Bomber, then yells that he will never forgive Buggler. The Great Gattaida then was defeated by the Bomberman Bros. As a last resort, Buggler uses his own power to grow into Ultimate Buggler. The Five Dastardly Bombers finally regained their senses after Great Gattaida was destroyed and voluntarily give their strength to the Bomberman Bros., defeating Buggler for now. With his final words, Buggler warns that he will always continue to return as long as evil exists in the hearts of men. Afterwards, the formerly Dastardly Bombers peacefully resumed their previous lives, again on good terms with the people of Planet Bomber.

His personality has never really been made clear or expanded upon in the games, but he is shown to be incredibly evil.

In Bomberman Jetters, his personality is initially perceived as incredibly evil and selfish, just like in the games. But it is revealed that he isn't evil at all, he merely has a strong, bitter rivalry with Dr. Ein because of a childhood crush on Momo, White Bomber's grandmother.

Despite his so-called evil intentions, he never intends actual harm on anyone; this is shown when Max led a direct assault on Planet Jetters without his permission, and in fact strongly opposed it.

Near the end of the anime, Bagura gains the role of the victim after Dr. Mechado seizes control of the Shumulvault and imprisons him. Bagura's relationship with Mujoe is then revealed to be more of a close friendship than that of a boss and his lackey, and Bagura begins to show genuine remorse when it seems that Mujoe has perished.

In Super Bomberman R, however, he is unequivocally evil, broadcasting his universe conquering ambitions to all planets, giving the choice of submission or termination. When defeated he goes as far as claim that evil in the hearts of all life-forms in the universe created him, and he will return so long as evil itself exists.

In the anime series Bomberman Jetters, Bagura is the true leader of the Hige Hige Bandits with an adjusted personality and motive. However, he appears to be unaffiliated with them in the game continuity, and the anime's depiction serves to combine the forces of two of Bomberman's persistent rivals.

Although he appears to be an elderly man, Bagura has some rather powerful abilities at his disposal.

The following is a list of official renderings of the name 「バグラー」 (Bagurā), sorted by game.

Note that the Japanese word 「バグ」 (bagu) translates to "bug", as in a computer bug.

Bagular with the Dastardly Bombers 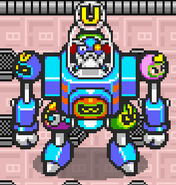 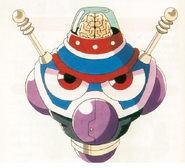 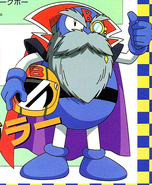 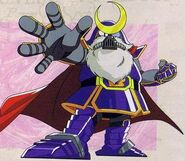