1997
Atomic Bomberman is an action game that was released for the PC in 1997. It is one of only a few games in the Bomberman series to be made outside of Japan. It was developed and published by Interplay under license from Hudson Soft.

This game differs from previous Bomberman games in that the gameplay is much faster. The bombs detonate faster and the players move faster as well. It is one of the only official Bomberman games to support ten players at once- a feat shared with Hi-Ten Bomberman and Saturn Bomberman.

Several of the items in Atomic Bomberman were re-named from mainline Bomberman games. The game is also fairly extensive, sporting 17 death animations.

Atomic Bomberman includes the following Bombers, albeit with vastly different designs due to the change in art style. Like Super Bomberman 2, each Bomber's bombs and their resulting explosions are colored to match the Bomberman that dropped them. 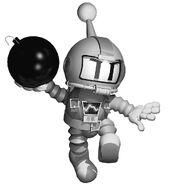 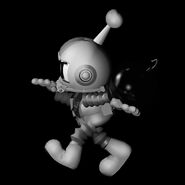