Bomberman Jetters
Achoe is the leader of the Chige Chige Bandits debuting in the Bomberman Jetters anime in episode 11. His appearance is similar to that of Mujoe except with alternate colors and is an ally of the Jetters.

In episode 40, he reappears after Mujoe was shot down by Hige Hige Bandits, now controlled by Dr. Mechado. Mujoe manages to escape and tricks the Hige Hige Bandits into thinking he is dead by covering half of his body and Achoe's body with sand looking as if Mujoe was cut in half. 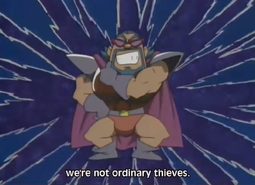 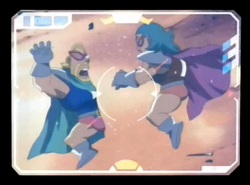 Achoe (right) and Mujoe trick the Hige Hige Bandits
Add a photo to this gallery
Retrieved from "https://bomberman.fandom.com/wiki/Achoe?oldid=44328"
Community content is available under CC-BY-SA unless otherwise noted.